The History of Audi Grilles

The Audi grille is one of the most recognisable in the motoring world. Yet, have you noticed how this iconic grille has changed over the decades? Current Audi design chief, Wolfgang Egger, believes that the Audi front grille is a part of the brand’s symbolic identity. Today, current Audi car grilles take the shape of the Singleframe, a word Audi has trademarked to prevent any competitors using it. However, it took several evolutions before ending up in the form it is now.

The original Audi grille was a simple affair. The four rings badge was framed by a straight silver line that ran almost to each headlight, and the grille itself was anything but ostentatious. The brand began to develop its identity much more in the next decade.

The 1980s saw Audi become a popular culture icon with the launch of the Quattro. The grille here saw Audi do away with the long silver line and make all the edges sharper and squarer. The 80s also saw the development of the horizontally-split grille, which was the forerunner to the later grilles which covered more of the front end of the car.

This is the decade where we finally, in hindsight, started to see the birth of the Audi car grille as we know it today. The square, 90-degree angles of the 80s were replaced with a more sloping frame, wide at the top and moving inward as it travelled down the car. The silver of the four rings badge was echoed in a metallic frame around the grille, making it even more visible and much more an integral part of the brand image.

At first glance, there doesn’t seem to be a huge difference between Audi’s grilles of the 90s and the 2000s. But let your eye travel down, and the secondary grilles at the bottom of the car bumper echo the stylings of the 80s, but give a hint of the next step in the grille’s development.

Audi took those two separated grilles, the sloping angles, and brought it all together in the Singleframe we see today in models like the recent A3. The new grille is an eight-sided, massive affair with a network of hexagons behind the badge which combines eye-catching style with practicality. Despite the huge change since the original straight grilles, this newer design is still unmistakably Audi. Talk to Zunsport about an Audi custom grille and how it can transform and enhance the look of your car. 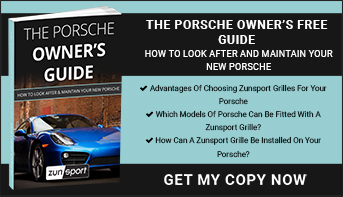 What will be the best selling car of 2020?
2020 is almost certainly going to be a strange year for cars, but will that mean a few surprises or ...

Send A Zunsport Gift Card To Show You Still Care!
Showing your family or your mates you're still thinking of them during the lockdown can be tricky. T...

Get Into Summer Mode With A Zunsport Grille
Does it feel like winter is lasting longer each year? Winter blues can bite hard, and it's not just ...

Want An Upgrade But Can't Afford A New Car? Here's 6 Ways To Modify Your Vehicle
Nothing feels better than racing down an open road in a top of the range new motor. Of course, we ca...

The History of Audi Grilles
The Audi grille is one of the most recognisable in the motoring world. Yet, have you noticed how thi...

How To Make Your Car Stand Out At A Car Meet
Car meets are the perfect venue to show off your pride and joy and to spend some time with other ent...

3 Car Engine Overheating Causes
Your car overheating can be a mild inconvenience at best, and result in expensive repair bills at wo...

Turn Your Trash Into Treasure! Enhance The Look Of Your Car With These 3 Easy Ideas
If you're thinking of car modification ideas to improve the look of your car, but don't want to brea...

How To Extend The Life Of Your Car
If you’ve just splashed out on a brand-new BMW, or maybe spent the last ten years nurturing and cari...

Get Your Car Crazy Family & Friends A Zunsport Gift Card For Christmas
It’s that time of year again! Not quite the last-minute scramble to find something for that one pick...

The History Of The BMW
Ever wondered how BMW got to where they are? In the modern day, BMW is a reputable company, producin...

4 Common BMW Issues & How To Troubleshoot Them
Your car is your pride and joy and you'll do anything in your power to keep it in the best possible ...

5 Ways To Modify Your BMW
BMW are renowned for making some of the very best cars in the world. From the beautiful Z4 to the ba...

4 Ways To Protect Your BMW
BMWs are still one of the most popular cars on the roads today. Their mixture of style, power, relia...

Zunsport’s Favourite Ford Fiesta Modifications!
There’s no doubt about it – the Ford Fiesta is an absolute classic. For more than 30 years, Ford’s l...

What Are The Practical Benefits Of Grille Modifications?
If you own a performance vehicle, you’ll want to keep it in its best condition. While adding a custo...

How Do I Fit A Motorhome Radiator Grille?
At Zunsport, we pride ourselves on producing some of the finest motorhome radiator grille products o...

4 Benefits Of Investing In A Zunsport Radiator Grille For Your Motorhome
When it comes to choosing a new grille for your motorhome, the options can be something of a minefie...

What Do I Do If My Motorhome Radiator Grille Is Faulty?
Your motorhome likely travels considerable mileage - after all, road trips are what they're designed...